Wayde van Niekerk: I can dominate for 10 years on return from injury

Home 4 / 02 NOTICIAS MENTE ATLETA / Wayde van Niekerk: I can dominate for 10 years on return from injury

Wayde van Niekerk: I can dominate for 10 years on return from injury

Wayde van Niekerk has pledged to come back better than ever after admitting he will miss the whole of 2018 with injury.

And seven months after undergoing surgery, he told Standard Sport: “The focus is now on next year and when I return next year, I want it to be like I never left.

“In fact, I have no doubt that I will be a better athlete than I was before the injury. I can refresh my mind and rebuild and the next 10 years I can get back-to-back titles and continue to go from strength to strength.” 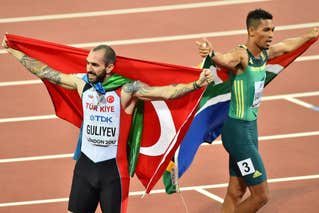 The 25-year-old was branded “a knucklehead” by two-time Olympic champion Edwin Moses for taking part in the rugby game in which he got injured.

And Van Niekerk admitted there had been no shortage of thinking ‘what if?’ on his part.

He said: “When it happened, I was quite optimistic but really I was only hoping for a miracle. And that was followed by a day or two of regret.”

It ruled him out of the Commonwealth Games and, among other things, a return to London for the Athletics World Cup in July, an event that is now missing arguably its biggest draw.

However, Van Niekerk has his sights set on a return to the London Stadium where he was crowned world champion over 400metres last summer.

“The World Cup is what athletics needs,” he said.

“It’s another big competition and shows growth in the sport. As an athlete, you want to dominate and conquer and that in London would be another stage for me on which to do it.”

Longer term, Van Niekerk’s focus is on the defence of his 400m world title in Doha next year and his Olympic gold in 2020 — and the potential to target global crowns in all sprint disciplines.

As for a potential treble at world and Olympic level, he added: “It’s not what I can and can’t do at this stage. If the times keep coming down, there’s opportunities in all three.”

Leer más
Back to Top